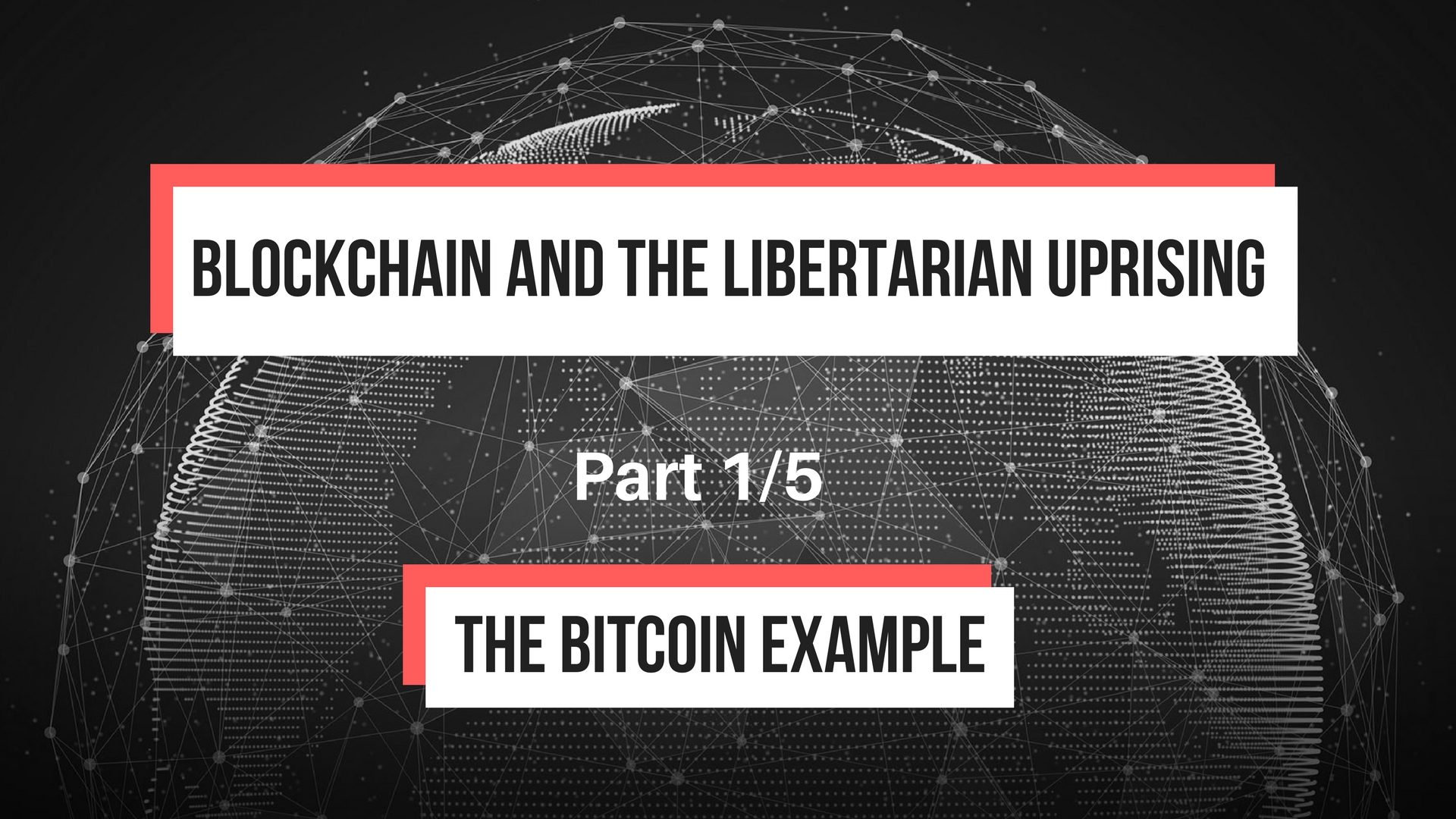 This is part 1 of a 5 part series adapted in blog format from my senior research paper titled “Blockchain and the Libertarian Uprising“.

Why do we trust a currency backed by a government that is fourteen trillion dollars in debt? Ever since 1971, when Nixon announced that US dollars could no longer be redeemed for gold, the value of the dollar has been based on our faith in it; we trust that a dollar with be worth something tomorrow, so we accept dollars today (Source). Everyone who uses the dollar has put their trust in the central authority of the US Government (The Treasury, Federal Reserve, etc.).

If you are a government, you create currency by manufacturing tokens of exchange and stimulate the flow by requiring that all taxes and fees be paid in your approved token. If you are Satoshi Nakamoto, you create currency by releasing ingenious code designed to run on an infinitely scalable network of globally distributed computers. Enter bitcoin; enter the blockchain. “Now we have a small piece of pure, incorruptible mathematics enshrined in computer code that will allow people to solve the thorniest problems without reference to ‘the authorities’” (Source).

With blockchains, individuals no longer have to trust in an authority to keep secure records. Blockchains are to trust what the internet is for information (Source). If the internet has taught us anything it’s that when change comes, it comes fast. Suddenly, central government may seem as archaic as the feudal system. Perhaps, society no longer needs a government-backed currency to facilitate exchange. What if individuals had total control over their data online? Maybe a liquid democracy is not only possible but necessary in today’s blockchain economy. Libertarians have long advocated that the sole purpose of government is “to protect individual rights to life, liberty, and property, and not abrogate these rights” (Source). By this Libertarian view, the United States government is bloated with unnecessary duties that blockchain technology is poised to organically force into obsolescence. Should the blockchain fulfill its full potential, it will become the backbone of the Libertarian uprising.

Bitcoin is the first and largest implementation of a digital globally distributed decentralized ledger or “blockchain”.

“A blockchain is a shared, distributed database that acts as an immutable ledger, recording entries and verifying them across a number of independent participants. Once an entry is made, it’s marked with a unique hash code that places it sequentially in the ledger” (Source).

In the last decade, bitcoin has demonstrated that a currency can exist without any government to endorse or perpetuate it.

Bitcoin is like digital gold that can be traded from person to person without a bank to keep track of all the transactions and levy fees (Source). However, the gold analogy is misleading. An individual’s bitcoins are not stored in a computer file or as a record in a central database like a bank account balance. All of the bitcoins in “circulation” lie in bitcoin’s blockchain which is an active record of every bitcoin transaction since bitcoin came into existence in January 2009 (Source).

Roughly every 10 minutes, like the heartbeat of the network, all the transactions that have occurred in that span are placed into a “block” and are cryptographically signed in such a way that it mathematically relates to the all the transactions in the block that came before it (Source). The computers that do this verifying and cryptographic hashing are called “miners”. Other computers, called “nodes”, store complete or partial copies of the entire blockchain and are updated as new blocks are appended (Source).

The computers that comprise the network that builds and verifies the Bitcoin blockchain are owned and operated by individuals who are incentivized for their service to the bitcoin network by automated bitcoin payouts proportional to the amount of computing power they provide (Source). There is a fixed supply of 21 million bitcoins that can ever exist (Source). Currently, 12.5 bitcoins are created every time a new block is added to the blockchain (Source). These newly created bitcoins serve as the payout to miners mentioned earlier. Individuals who wish to use bitcoin need only a small piece of software called a “bitcoin wallet”. Each wallet issued has a unique address made of a string of random numbers and letters (Source). In order to send someone bitcoin, only their wallet address must be known; thus making bitcoin a pseudo-anonymous currency.